Our home is slightly bonkers, just like us. We’re a bit like magpies so we really try to self censor so as to not overindulge, but it’s a rule that’s failed miserably. 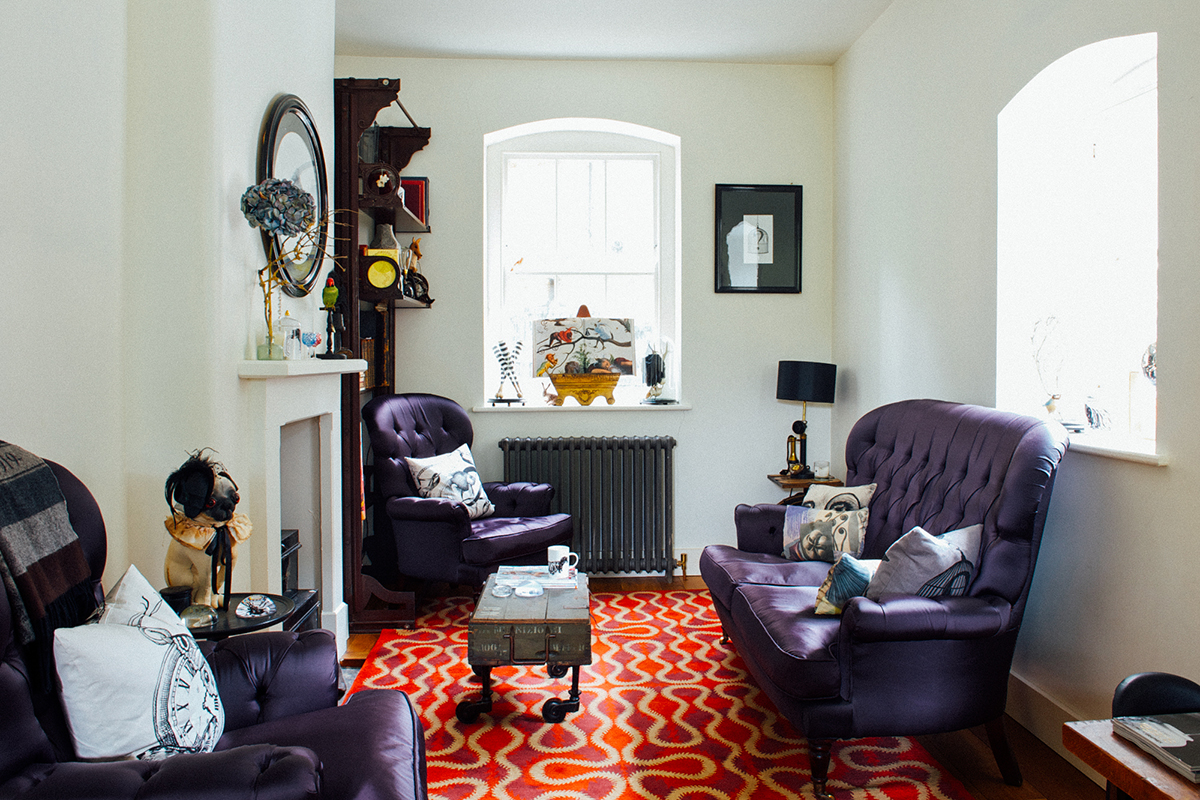 The artist Rory Dobner and his wife Claire bought their magical Hampstead flat in November 2003, after becoming enchanted by a small two bedroom apartment that was situated in a Victorian mansion block dating from 1850. Set back from the road and overlooking a “magically secret garden,” the estate agent had almost given up finding the flat, so hidden is it in the warren of Hampstead back streets. When they eventually did find it, they were won over by its exposed beams, flagstone flooring and original woodwork, none of which had been altered since the building was first completed, and finding out that the punk rockers Sid Vicious ad Johnny Rotten had once squatted the building sealed the deal.

Since buying the flat, which did not even have a kitchen or a bathroom when they moved in, Rory and Claire have completed an impressive amount of structural work. First on the list was digging out the basement to create a family kitchen and dining room with a glamorous black tiled family bathroom, which involved digging through layers of thick clay soil while avoiding the underground river, and carrying it out by hand to the nearest road through the neighbouring gardens and alleyways.

Next they bought the flat next door and made a lateral conversion to create a further bedroom and family bathroom on the ground floor, so that their two young sons could have their own rooms. Lastly, they bought the land behind and next to them and extended into their back garden to create a dream double height studio space for Rory to work in, adjacent to the kitchen. The result is a warren of rooms that the family jokingly calls “Hampsterville”.

Rory and Claire have really strived to respect the character and homely quality of the building that they first fell in love with. “We’ve thoroughly enjoyed ourselves, experimenting with building our own bespoke kitchen from school tables, playing with colour and trawling salvage yards for reclaimed bricks, flooring and fittings,” says Rory.

His own wildly imaginative and eccentric drawings pop up all over their gorgeous home, while many of the objects such as playful pieces of taxidermy like ‘Albert’ the duck or vintage collectibles that are displayed on the window sills, mantle pieces and walls are recognisable from his pictures. “We love the unusual, items with character that talk to you, that have a past and we can’t resist naming lots of our them as characters have to have names.”

Rory rose to fame quite suddenly after a buyer at Liberty saw one of his drawings and the store began to stock a small number of his original inks. Since then, Rory’s intricate drawings and dramatic wire sculptures have become so popular with London’s creative community and with a number of celebrities and international clients that he can barely keep up with the demand for his work.

Rory collects antique and vintage frames and frames all of his work himself in his light-filled studio, where he works at a five meter long bespoke desk. “Our home is slightly bonkers, just like us,” says Rory. “We’re a bit like magpies so we really try to self censor so as to not overindulge but it’s a rule that’s failed miserably.”